This 2013 season for the Kansas City Royals…the comment that has been made a lot the last couple months is how this season has been a roller coaster for Royals fans. So let’s start where all good stories start, the beginning.

April was a great month for the Royals, as they would string together their first over .500 month of the season…but we weren’t for sure they were actually contenders. The team would travel to Philadelphia that first weekend of the season and Mike Schmidt and George Brett would throw out the first pitch simultaneously. Schmidt would also discuss how he had hemorrhoids during the World Series in 1980 but didn’t talk about it like George. Philadelphia would also be the sight of Greg Holland’s first blown save of the season; Royals fans would freak out. But the real shocker in April happened on the 16th. In an event that I thought would force the end of the world, Chris Getz hit a home run. Seriously, a real over the fence, over the right fielder’s head and in the air home run! In other news, someone saw a unicorn in Atlanta that night. April would also see the Royals stranded in Boston, as a manhunt to find terrorists was going on, locking down the entire city. The Royals were back in action the next day, just in time to hear David Ortiz sound like Tony Montana.

Jeremy Guthrie would throw his first ever complete game shutout on the 3rd of May and…well, May sucked for the Royals: A-LOT. May was also the month Ned Yost asked if he should spank his players for their bad performance. Really. The team was so bad in May that they started the month in first place and by the end of it they were in last. It was so bad that on May 30 the Royals threw a Hail Mary and hired George Brett to be the hitting coach. All this stuff happened the first two months! I’m still shocked Chris Getz hit a home run.

Moving on to June, Brett and assistant hitting coach Pedro Grifol would work with Eric Hosmer and Mike Moustakas and on June 14th, we began to see improvement in Hosmer. By June 17th, the Royals were back at .500, even if the team was winning with smoke and mirrors. Then on June 22nd, an angel swung down from the heavens, and sent little Christopher Getz to Omaha. I was elated. Lee Judge was probably in tears. Wil Myers was also recalled in June. Unfortunately, it was for the Tampa team that Kansas City traded him to. I still cry when watching his highlights. By the end of June, Hosmer had homered and looked like he did his rookie year, while Moustakas had pushed his average up over .200. June 29th, Johnny Giavotella was recalled by the Royals, as he was told he would be the starting second baseman by Dayton Moore. He would last a whole ten games and 38 plate appearances. In a corresponding move, Jeff Francoeur was let go by the team, which left a giant hole on Frenchy Quarter Thursday’s, but gave David Lough a chance to play a good right field for Kansas City, something we hadn’t seen since 2011.

July brought us the All-Star game, where three Royals were selected which hadn’t been done in…sorry, ran out of fingers. Let’s just go with it’s been a long time. Or 1988. This is also the time where people started noticing just how dominant Greg Holland has been this season. Right after the All-Star game, Dayton Moore said the Royals were capable of winning 15 of the next 20 games. Most of us laughed, mocked and threw some snark around…and then the team went out and won 16 of 20! The Royals would stand pat at the trade deadline, not dealing Ervin Santana, but would also lose George Brett, as he stepped down as the hitting coach on July 25th. Hey, we got two months out of #5…the golf courses were calling him!  Things were going so good in the second half of the season that Bruce Chen was inserted into the rotation and has been a pleasant surprise. 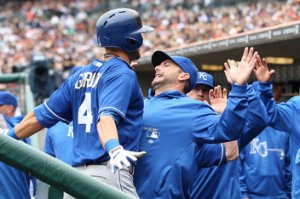 August started and the red-hot Royals continued to win. Everything the Royals were touching turned to gold, as even new acquisition Justin Maxwell got off to a great start for Kansas City, hitting over .400 while hitting a couple of big home runs for the team. All the while, the Royals had sneaked back into the wild card hunt, pushing themselves to within 2 games of the second Wild Card spot. The Royals would come down to earth a bit by the middle of the month, as middle infielder and soon to be Royals retirement home inhabitant Miguel Tejada was suspended by Major League Baseball for twice testing positive for amphetamines. No word on if Chris Getz was tested after his long bomb in April. Injuries would also hit the Royals, and looked as if the end was near for our boys in blue. 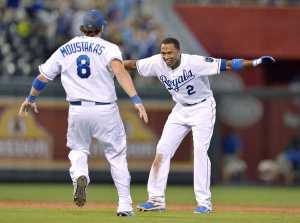 September would roll around though, and the winning would pick back up. Ever so slowly, the Royals crept up this month, closer and closer to the second wild card spot in the American League. Close enough that playoff tickets are getting printed off just in case. Close enough that other teams are already saying they don’t want to face Kansas City if they make it to the playoffs. Close enough that some of us aren’t sure how to act in a pennant race. We are sitting here, two weeks left in the season and the Royals are contenders. Sure, they’ve taken the long, weird and nonsensical way to get here, but they are here. This, THIS is all we have asked for the last eighteen years. Let’s hope this becomes a regular occurrence in Kansas City. This 2013 season…