As most Kansas City Royals fans will tell you, catcher Salvador Perez is a special player. He isn’t just special because of his great throwing ability, or solid bat. He is a leader to the pitching staff and I have yet to hear one pitcher say they disliked throwing to him. In fact, almost every pitcher to a ‘T’ has said they love throwing to Salvy. Perez is loved by his entire team and helps loosen up the mood in Kansas City’s dugout. So when people throw names like Bench and Molina around when comparing Perez to someone, it isn’t just rose colored glasses or fan lust. But there is one thing that concerns me about our possible perennial All-Star, and it has nothing to do with anything Salvy himself does. No, what concerns me is how Perez never seems to get a full day off behind the dish. Even in games where George Kottaras starts in his place, before that game is over with, Perez is back behind the plate. This concerns me to no end. 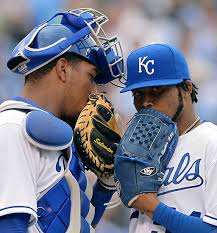 Before we start, I’ve heard the arguments, and I get where some people are coming from. Perez is only 23. His only major injury was last year’s meniscus tear in his knee, which held him out for the first couple months of the season. You could probably also throw in there the concussion Perez encountered just a few weeks ago(and I do consider concussions very serious). Overall, Salvy has encountered very little wear and tear on him and is young enough to where it will probably be awhile before he shows the affects of crouching behind the plate for a 162 game season. But the point isn’t that he should be fine for the immediate future. No, what concerns me is where it puts him in about 5-6 years.

There is a thinking in baseball that catchers shouldn’t be tall and lanky. In fact, only 11 catchers over 6’4 in MLB history have ever accumulated 2,000 career at bats. The most high profile on this list is Minnesota’s Joe Mauer, who is a two-time batting champ and an exceptional hitter. Perez is only 6’3, but in my eyes that is close enough. The general thinking is that tall catchers don’t last because they encounter more injuries, especially in their knees, than smaller, squattier(I know, not a word. Consider this me making a new word) players who wear the tools of ignorance. Mauer is the perfect case of that, as his injuries over the years have made it to where the Twins have started playing him at first base. Minnesota knows that at some point, they will probably have to move Mauer to another position to keep his bat in the lineup. He wouldn’t be the first. Carlton Fisk had a stint in the outfield late in his career, even though it didn’t really stick. Johnny Bench was moved around, playing some third base, first base and even the outfield. These are elite catchers in the pantheon of the game, the best of the best and they were forced to move away from being a full time catcher. So history shows where Perez’s future could lie.

Knowing all of this now, I bring the question back up: why is Ned Yost insisting on putting Perez into  every single game behind the plate? I get that Perez is better defensively than backup George Kottaras. Kottaras is known to call a good game, but arm wise it’s not even close. Same for blocking pitches in the dirt. Like I said, Perez is just a really special ballplayer in that regard. I firmly believe that a lot of the reasoning Yost has for bringing Perez in late in the games he doesn’t start is for his defense and to hold a lead. Trust me, I get the thinking. But is it really worth it? Kottaras is probably one of the best backup catchers in the game, as he has the uncanny talent of basically being a ‘I’m either going to collect a walk here or hit a home run’ kind of player. His OPS this year is ridiculous for a guy hitting below .200. Really the only reason to take Kottaras out of the game is to have a better arm behind the plate. Like I said, I get the reasoning, but I don’t agree with it. 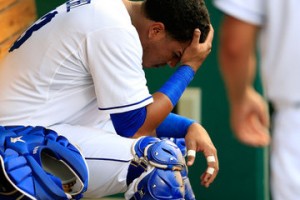 The perfect example of why I don’t agree with it happened a few weeks ago in a game against the New York Mets. Perez was brought in late in the game as a defensive replacement, and proceeded to catch a foul ball off his mask, causing a concussion. Now, I am fully aware that this could have happened at anytime, or any game. It’s part of the danger of being a major league catcher. But once again, Kottaras could have still been in the game, as there was really no reason to bring Perez in. If I had a choice, I would rather lose Kottaras for a few games than Perez. What if the concussion had held him out longer than the seven games used for concussions in baseball? Just look at someone like Justin Morneau, and how long it took him to come back from his concussion. It would seem that the more a player is in the game, the higher percentage of him getting hurt goes up. That is obvious. Perez so far this year has appeared in 95 games, 87 that he has started. He also missed time earlier in the year, as his grandmother had passed away. Perez was gone for nine games during his leave. Add in the seven he was on the concussion DL, and that is 16 games Perez was not available. The Royals have played 118 games so far this year, so he has missed a total of 23 games. So there are games that he didn’t come in as a defensive replacement, but not very many.

What befuddles my mind more than anything is that his manager, Ned Yost, was a former big league catcher. It is very well known within baseball that a catcher needs more days off during the season than a regular position player. A catcher squats a ridiculous amount of times in a game and the up and down movement wears a player down after awhile. So it would make sense that if your manager was a former catcher, they will take care of you and give you the extra time off you need. But Yost doesn’t seem to follow this philosophy. Perez isn’t the first catcher that he has attempted to run into the ground. Anyone remember Jason Kendall in 2010? Kendall played so much that year that I forgot backup catcher Brayan Pena was even on the roster. He had to be collecting dust and cobwebs as he watched Kendall play day after day. If it wasn’t for an injury late in the year that ended Kendall’s career, who knows just how many games Pena would have actually gotten into. For a guy who spent his career behind the plate, it sure seems like he’d rather run his catchers into the ground and say ‘to hell with the future’. For a team of youngsters, that just makes no sense to me whatsoever. To me, Yost should know when is a good time to rest his pitch caller and when not to.

It seems weird that I am preaching the case for resting a 23 year old catcher who is in only his third big league season, but I am. The Royals have Perez locked in for possibly the next six years, so this is an investment they should be taking care of. It’s a proven fact that tall catchers just don’t hold up as well to the rigors of catching duty on a daily basis the way a shorter catcher does. Just look at guys like Ivan Rodriguez and Yogi Berra as the cases for the short catcher. Hopefully Yost wises up within the next month and gives Perez some extra days off. The Royals could fall out of playoff contention sometime in September and if that happens, it would be as good a time to give more starts to Kottaras or even a Brett Hayes if he is back on the roster at that point. Unfortunately, you have to baby your catcher a bit more than say, your outfielders. If that means giving a guy like Salvador Perez an extra day off from time to time, you do it. Trust me, in six years you’ll be glad it was done. There is a famous line from the Neil Young song ‘Hey Hey, My My’: “It’s better to burn out than to fade away”. In the case of Perez, I hope we don’t find out whether that is actually true.