This time of year you often hear about how we are only a few weeks in, it’s early, and everything is a small sample size. All that is true, which is why longtime fans never get too worked up throughout the first month of the season, as we’ve seen this all before. Teams play above their expectations, guys you never thought would be stars all of a sudden break out, and player’s struggle. It’s almost a longstanding tradition for someone to have a cold start to the season before righting the ship. Seventeen games in, and Kansas City Royals third baseman Mike Moustakas is mired in a major slump, and having witnessed the same thing just one year ago with first baseman Eric Hosmer, fans are already asking: “How long does Moose have before the Royals have to send him to AAA?” 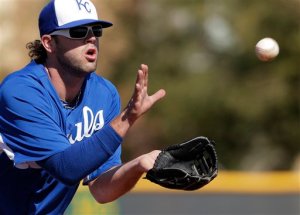 During the first half of the 2012 season, it looked as if Mike Moustakas was having his breakout season. Not only was he hitting the ball with authority, but his defense had improved to the point that his name could be mentioned in the Gold Glove conversation and not be  laughed at. All signs pointed to him improving faster than golden boy Hosmer. Then in late July, Moustakas sprained his right knee in Seattle and the season went downhill from there. After batting .268 in the first half, Moose batted a paltry .211 in the second half of the season with his slugging percentage dropping from .490 to .325. Most everyone put the blame on the knee issues and figured if he got healthy during the offseason, we would see more of the Moose we saw in the first half of last year in 2013. But so far, that has been the farthest thing from the truth. 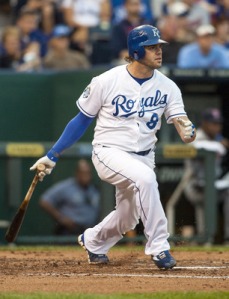 Now remember, before we delve into this, we are about three weeks into the season and there is more than enough time to turn things around. By no means is this a declaration of the sky falling and the world caving in. But there are some worries. Moustakas has gotten off to a rotten start so far and his numbers show it. Through the fifteen games he has appeared in, Moustakas is hitting a putrid .158 with an even uglier slugging percentage of .193. He has walked five times, which is a tiny consolation, but he was intended to work in the middle of the order for the Royals and he has done nothing so far to deserve to stay there. So far he only has 2 extra base hits and one lonely RBI to account for, but there are other numbers that don’t completely explain what is going on. His average facing lefties and righties are very similar, and his road and away numbers aren’t so far apart that you can really gauge something from it. So what numbers do help explain some of the problems?

The numbers that really stand out to me are his batting average in certain counts. In counts that favor Moose(whether that means first pitch or counts with more balls than strikes), he seems to be making better contact. But when you venture into the counts in the pitchers favor, Moose’s numbers’ plummet. Take a look here. This shouldn’t be completely surprising, as it makes sense that if you are down in the count, it is in the pitchers’ favor. But if you are ever going to be a successful major league hitter, you have to do better in those situations. So far, it seems to be making matters worse for Mr. Moustakas.

Is there anything else that stands out? If you are like me, and have watched the majority of the Royals games so far, you have probably noticed the high rate of popups that Moose has hit. This probably means that he is getting under the ball and his timing is off just a hair. It would also explain a lot of the other problems, as he is just not hitting the ball with any authority. If you remember the beginning part of last year, Hosmer was lining out a lot and hitting the ball right at the defenders. Call it bad luck, or good shifts, but he was at least getting a good read on the ball. Moose doesn’t look like he is doing that so far, and in fact looks lost a lot of the time. That is not a good sign, and could make for more problems in the coming weeks. With the Royals offense still sputtering, they need Moose to find a groove and start hitting the ball with a little bit of oomph. Instead I’ve started counting the pop ups and wondering if I should yell ‘Too High’.

So what are the Royals to do? For now and the immediate future, the best thing is for Mike to continue to work with hitting coaches Jack Maloof and Andre David and hopefully get these issues straightened out. But so far the Royals are getting great outings from the starting pitching, and there is only so long they can tolerate someone(anyone?) hitting below .200. The question then gets asked ‘how long does Kansas City stick with him before sending him to the minors?’ I think the team will give him a long leash, as there doesn’t seem to be one solid answer for the team in the minors and Moose is still playing good defense. If it does happen, we will probably see someone like Anthony Seratelli or Brandon Wood called up, or possibly even Irving Falu. Whoever would get chosen would probably split time with Miguel Tejada and Elliott Johnson, unless one lone player stood out from the bunch. Unfortunately, none of those players do, so none are really a long term answer if Moose can’t find his swing. The depth just isn’t there for the Royals. But as of right now, I think he has another 3-4 weeks before that conversation is had. But at that point, something will probably have to happen. If it does, it isn’t the end of the world for Moustakas. Some kid named Brett got sent down to the minors early in his career, and eventually he came back and held third base in Kansas City for a very, very long time. He wasn’t too shabby of a ballplayer either. So by no means would this mean the end of the world for Mike. But something has to give, and probably soon. If not, he will be correcting his swing in the minors.