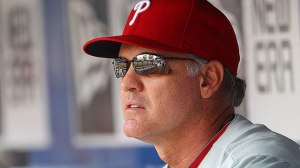 The one constant in baseball is change…well, that and the Pirates will continue having losing seasons. Wait, what? The Pirates are in first place? But it’s August! Anyway, back to change. Change is inevitable, especially when it comes to the manager’s job in Major League Baseball. As of last week, no manager had been fired during the 2013 campaign. That was until Friday, as former Phillies manager Charlie Manuel denies he quit or resigned. That leaves the only other option, fired. Taking his spot in Philadelphia is their third base coach, Ryne Sandberg. Yes, former Chicago Cub and baseball Hall of Famer Ryne Sandberg.

It was long thought that Sandberg would be Manuel’s replacement once he stepped down, so no big shock in that regard. Sandberg has been spending the last six years managing in the minor leagues, building his resume and hoping for a future managerial job in the majors. In fact, Sandberg had honed his chops in the Cubs system, working his way up from A-Ball to AAA before it was all said and done. The Cubs passed Sandberg over for their major league job, despite many fans and experts feeling like he deserved the spot. Sandberg took his talents to the Phillies. Oh, the irony.

You see, Sandberg was originally drafted by Philadelphia and was eventually traded to the Cubs with Larry Bowa for shortstop Ivan DeJesus. For years, the Phillies kicked themselves for that trade, but would be able to save some face if Sandberg could be a successful manager in the big leagues for them. The big question is whether or not he will be a good major league manager. You see, throughout the history of the game, very few Hall of Famers ever turned out to be great managers after their career was over. In fact, only four Hall of Famers who managed posted a winning percentage over .500. Most fail and fail so badly they never manage again.

Take Ted Williams. “Teddy Baseball” is one of the greatest baseball players ever, and some like myself consider him the greatest hitter in baseball history. But Williams ran into a huge problem when he went to manage; he expected his players to be as good as he was. Very few can even get close to having the ability Williams had, so of course his unrealistic expectations for his team led to him having a .429 winning percentage from 1969-1971. So Sandberg has a steep mountain to climb, but from all accounts it seems he’ll be fine. He has long been highly regarded as a strong managerial candidate and one of the main positives heard about Ryno was his ability to get veterans and youngsters to work together and try to reach the same goal. Many of the veterans he managed at AAA mentioned how good a job he did working with every player and not letting anyone feel left out. All the glowing praise piled on Sandberg made me want him as the Royals manager whenever they finally decided to let Ned Yost go. I knew it probably wouldn’t happen and was a long shot, but a guy can dream, right? 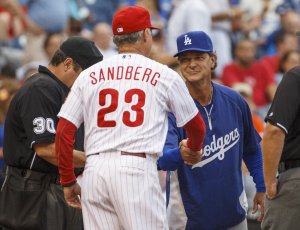 Ryno is technically only an interim manager at this point for Philadelphia, but if he does a solid enough job over the next six weeks, it seems the Phillies job is his to hold next year. I’m glad to see Sandberg finally getting his deserved shot at managing a big league ball club and wish him all the success in the world. Still, it would have been nice to see him in Royal blue.